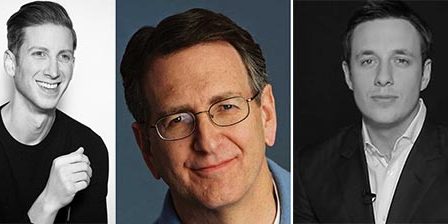 From left: Ryan Begelman, Mark Bisnow and Will Friend

From the New York website: Bisnow, the commercial real estate media company best known for its newsletters and techno-thumping early morning events, has sold for about $50 million to private equity firm Wicks Group.

The acquisition by Wicks, which mainly invests in companies in the media and information space, will help Bisnow expand into new national and international markets. Will Friend, Bisnow’s CEO, will stay on in his role.

“We couldn’t be more excited to have formally partnered with Wicks,” Friend told The Real Deal. “We took a very meticulous approach to finding a partner that shared the same vision for growth.”

Bisnow’s revenue in 2013, the most recent year it was disclosed, was $13.8 million. The lion’s share of that was from events, insiders said, with advertising making up a “smaller but significant” component. Founded in 2005 by Mark Bisnow, the company is now in 28 markets with 80 employees, and its newsletters collectively reach 500,000 subscribers.

Wicks will own a majority stake in the company, while members of the management team will hold small stakes.

Fortune first reported the news of the acquisition Thursday morning.

“From a media perspective, it’s interesting timing,” Ryan Begelman, former CEO of the firm and currently vice-chairman, said of the acquisition. “BuzzFeed cut its revenue projections in half, Mashable, Upworthy and Yahoo announced mass layoffs.” Those very well-capitalized companies, he added, had focused on “big eyeballs,” an approach which hasn’t quite panned out, whereas Bisnow took a hyper-local approach to news in a very specific category.

“Gaining credibility in new markets was more challenging than we anticipated,” Begelman noted. “We‘d go to each new market and people would tell us the real estate space was very insular. We’re really grassroots. We’d get to know the players and endear ourselves to them little-by-little by having a presence.”

Friend noted that being a pure-play digital company had worked against them early on.

“In commercial real estate, an industry that has typically been slower to adopt new technology, we had to build credibility since for many years print was taken more seriously,” he said. But the approach allowed the company to quickly scale into new markets, he added.

Begelman, who will be leaving Bisnow and plans to start his own venture in the near future, said the 24-7 schmoozing nature of real estate made it a “fantastic industry” to run an events-driven business in.

“It’s not just the millenials and Gen Z,” he said. “The entire business is highly social, and for a reason: the brokers need the developers, the developers need the brokers, and the architects need clients — there was a real community that was already local and informally in place. But no one had really tapped into it. Even if they’re going to ICSC every year to connect, what are they doing for the other 11 months?”

How To Prevent Inexperience From Getting In The Way Of Your First Deal
March 23, 2017
Go to Top