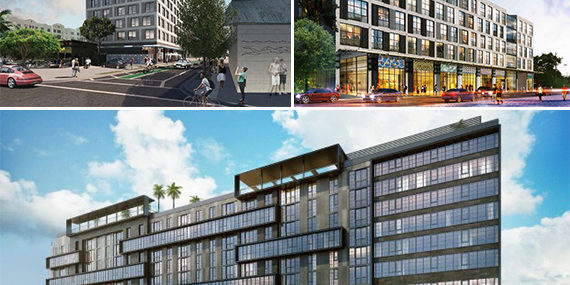 The Wynwood Design Review Committee unanimously approved designs for three buildings taller than 80 feet after an hours-long meeting on Wednesday.

Wynwood DRC members admitted they were worried that such tall massive buildings may forever change the low-rise artistic atmosphere that helped make the former manufacturing hub the trendiest neighborhood in the city of Miami. Currently, Wynwood’s mural art helps attract thousands of tourists and locals.

But change is in the air. After the neighborhood was rezoned, developers are now proposing to replace warehouses and vacant lots with mixed-use, high-rise buildings. During the meeting, committee members said they want to make sure the new structures don’t destroy the area’s unique vibe.

“We are trying to protect Wynwood as much as we can,” said Wynwood DRC member Marc Coleman, who is also president of One Real Estate Development.

Under a city of Miami ordinance governing the Wynwood Neighborhood Conservation District, most new projects in the neighborhood must come before the Wynwood DRC, which has the power to advise Miami’s Planning Department, Urban Design Review Board, and Planning and Zoning Board.

The project that received the most criticism was 222 Wynwood, an eight story, 119-foot tall apartment building with 35 live/work rental units and retail on the ground floor. Brooklyn-based RedSky Capital is the developer of that property at 222-234 Northwest 24th Street.

Although the bottom floor is decorated by colorful murals, the façade of the upper floors feature an off-white exposed design. Wynwood DRC member Victor Sanchez, also a senior project manager at Goldman Properties, was horrified.

“It’s just standing there, massive, big, and there nothing to look at,” Sanchez said.

“No one is going to want to take a selfie in front of that,” DRC member Zak Stern, owner of Zak the Baker, said.

Raymond Fort of Arquitectonica, the project’s architect, said the design’s intent was to “tone it back” and present and “inverted version” of Wynwood. If you splash the building with bright graffiti colors, Fort argued, “You are going to end up with something that’s not desirable.”

The 222 Wynwood project was ultimately approved, but with conditions. Among them: some artist color patterns had to be added to the building’s roof top trellis, the windows had to be enlarged, and the window’s sunscreens must be curated by an artist who is to come up with a color palette.

Stern told the 222 Wynwood team that it wasn’t anything against the project. It’s just that it was “the first large building coming up to Wynwood” and the board needed to come up with standards for future high-rises.

“You are our guinea pig,” Stern said.

The Wynwood DRC members were somewhat less critical of the dark gray design for East End Capital’s eight story, 123-foot tall Wynwood 25 building, which is slated to be built at 339 Northwest 24th Street. The project includes 289 apartments that will rent for less than $1,750 a month and 31,000 square feet of retail.

Still, the committee demanded a list of conditions, including reducing the amount of stucco on the façade, use painted signs for retail, and installing more artistic elements like sculptures for the ground floor’s “paseo.”

The committee did, however, like the two mural spaces on the façade of the Related Group’s Wynwood 26, an 86-foot tall project slated for 51 Northwest 26th Street. As planned, that development will include 176 residential units and a 177-space parking garage. However, DRC member Marc Coleman was troubled by the garage’s “stacker” tandem parking element. Among the conditions for the project was that the developer “revisit the valet setting” and come up with a plan that reduces wait time and impact on the street.

Sanchez wasn’t impressed with the look of any of the three buildings proposed. “I hope that future projects will push the envelope a little more on the design,” he said.

Besides the three towers, the Wynwood DRC also approved, with conditions, the Miami College of Design at 26 Northeast 25th Street, a proposed undergraduate program in industrial design that the IAM Foundation hopes to be open by early 2017.

The developer aims to add a third story on an existing two-story structure. The project was approved on the condition that the proposed façade be changed and that 75 parking spaces be provided for the school in less than three years.