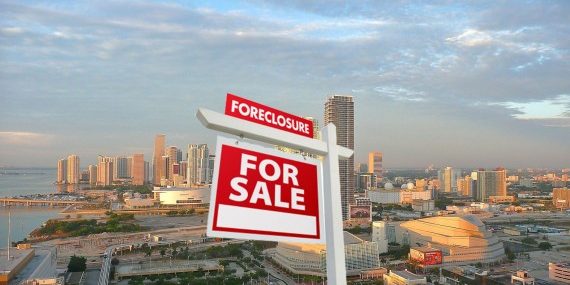 A June 2011 photo of the downtown Miami skyline (Credit: Marc Averette) and a foreclosure sign

While much of South Florida’s housing market is still finding its footing, one factor remains steady: foreclosure rates are going down, down, down.

A newly released report from RealtyTrac shows foreclosures for the tri-county area have fallen by more than one-third during the first half of 2016.

Of all South Florida’s outstanding home loans in the first six months of this year, one in 133 were in some stage of foreclosure. That rate has plummeted by 34.6 percent compared to last year, meaning South Florida now ranks 13th in the nation for the highest share of foreclosures.

Miami-Dade County by far had the most foreclosure filings in this year’s first half 8,020 properties, followed by Broward with 6,485 filings and Palm Beach with 4,078.

All three saw significant declines in foreclosure rates: Miami-Dade and Broward saw their rates fall by more than 30 percent each, while Palm Beach’s rate slipped by roughly 26 percent.

South Florida once led the nation for foreclosures during the late 2000s, when the recession and housing bust left many homeowners unable to pay their home loans.

Now, a new city has taken the top spot: Atlantic City in New Jersey, where one out of every 54 home loans has a foreclosure filing on it.

“With strong employment, low interest rates, and with lenders continuing to carefully scrutinize borrowers — foreclosures will soon be at the lowest levels in a decade,” Mike Pappas, CEO of the Keyes Company, wrote in RealtyTrac’s report. — Sean Stewart-Muniz

What Does It Take For New Restaurant Owners to Succeed?
May 11, 2017
Go to Top