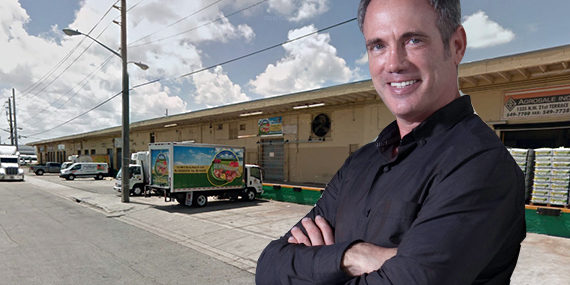 Miami Beach developer Robert Wennett closed on the purchase of the Miami Produce Center in Allapattah, marking another sign of the new commercial investment in the industrial neighborhood.

In all, the warehouse space sold for $103 a foot, while the land sold for close to $38 per square foot. They were built between 1938 and 1955. Wennett’s company financed the deal with a $13.6 million mortgage from SunTrust. The Next Miami first reported that Wennett was buying the properties. (Wennett’s UIA Management owns 1111 Lincoln Road.)

Tavilla Realty Associates Ltd. sold the properties. It’s unclear how long the Acton, Massachusetts-based firm owned the produce center as no previous sales are available online, but industrial prices in Allapattah, historically home to produce and food distributors, have jumped in recent years.

At a commercial and industrial real estate presentation on Allapattah, Kohn Commercial Real Estate’s Ronald Kohn said the price for a warehouse has increased from $50 a foot in 2013 to $120 per square foot now. The burgeoning neighborhood, he said, is hiding in plain sight.

Investors like Michael Simkins and the Rubell family have targeted the neighborhood, as well as smaller players.

McKenzie Construction and Craft recently redeveloped a large, 1938 warehouse into its current design and craft office, facility and showroom. Simkins bought the building in March from investor/developer Alex Karakhanian.

GoPro, Scripps Networks Interactive head to Wynwood
September 7, 2016
Contact us
Please complete the form below. We'll do everything we can to respond to you as quickly as possible.
Top News
Go to Top