How is Miami dealing with Airbnb’s growth?

TRD Special Report: This is the first in a series of stories examining Airbnb’s impact on Miami’s real estate market.

For $85 a night, you can rent a room in North Beach, about five blocks from Collins Avenue.

For $149 a night, you get a modern, one-bedroom apartment with bicycles, parking, a washer/dryer and a full kitchen.

And for $300 a night, the lucky renter gets a one-bedroom Brickell penthouse – parking included – within walking distance of the Metromover and Mary Brickell Village.

Airbnb is everywhere in Miami-Dade, from Homestead to Aventura.

Miami ranks in Airbnb’s top five markets in the U.S., behind New York, Los Angeles, San Francisco and Boston. From October 2014 to September 2015, more than 55 percent of the $2.4 billion generated by Airbnb was captured in those five cities, CBRE reported earlier this year.

“Miami is one of our largest U.S. markets and certainly a broader part of our strategy,” Christopher Nully, a spokesperson for Airbnb, told The Real Deal. “We really see increased growth in the market, but not just along the beach.”

Some cities across the U.S. have embraced the short-term rental service, while others have fought Airbnb head on. The company, last valued at $25.5 billion in December, operates in 34,000 cities in 191 countries. In Miami Beach alone, Airbnb commands 4,562 listings, according to data website Airdna.

So is Airbnb legal in Miami-Dade? Is it being regulated? Are renters being taxed?

“I’m not sure anyone knows how to deal with it,” said Joe Hernandez, head of the real estate group at Weiss Serota.

In Miami Beach, city code allows for vacation and short-term rentals (less than six months and one day), in certain zoning districts. But, they are banned in all single-family homes and in a number of zoning districts. See a map here. 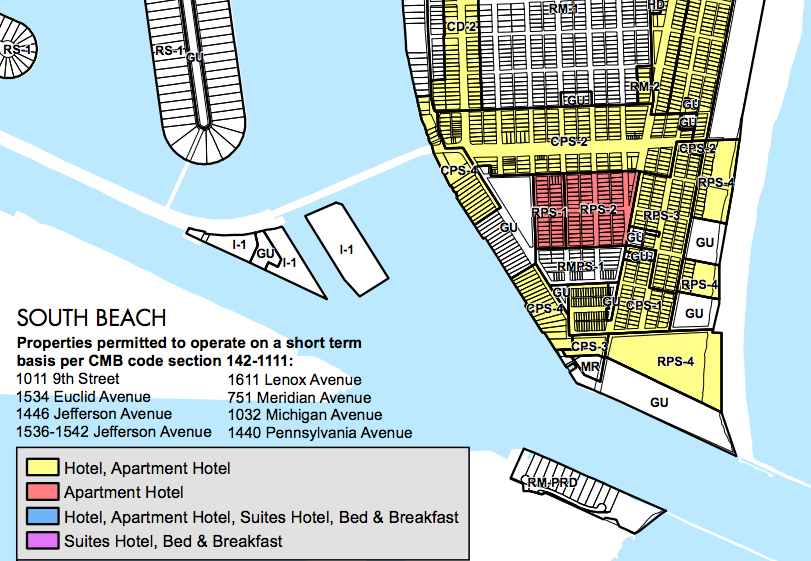 Violating (and getting caught) can result in fees and the eviction of tenants and visitors. According to the city, fines range from $500 to $7,500.

In Surfside, short-term rental properties had to be registered with the state as a transient apartment, resort dwelling or resort condominium as of 2011.

Hosts in Surfside are required to register for each rental period when their unit is rented, with a limit of three registrations per 12-month period. The rentals also incur resort taxes. According to city code, “properties that are eligible are those that can demonstrate a current and consistent history of short-term renting” and whose rental income is their primary source of income.

On Dec. 1, Airbnb began collecting and submitting Florida’s 6 percent bed tax, Nully told TRD. The company is also collecting bed taxes in 27 separate counties in Florida. Miami-Dade is currently not one of them.

“We continue to have conversations with local officials,” Nully said. “Our position is we want to work with as many governments and municipalities as possible to collect and remit bed taxes. Our goal is to make life easier for out hosts and our guests.”

Last month, Miami-Dade County Commissioner Juan Zapata called for the mayor to enter into an agreement with Airbnb to collect county bed taxes from its users, including the Tourist Development Tax and the Convention Development Tax.

Zapata’s district includes the neighborhoods of west Kendall, the Hammocks and Country Walk – markets that aren’t flooded by Airbnb users. Zapata said that while he hasn’t heard complaints from his constituents, his goal is to “create some value” from visitors who currently stay in unregulated and untaxed short-term rentals.

Legislation passed in Florida in 2011 prohibits local governments from regulating and restricting vacation rentals. Local governments also can’t limit the duration or frequency of the rentals. But any regulations prior to that date still stand, Susan Trevarthen, a municipal attorney at Weiss Serota, told TRD.

In 2014, Palm Beach County sued Airbnb, and other short-term rental companies regarding the collection of bed taxes. If those taxes were recouped, the cost of an Airbnb rental would increase by 12 percent, the Palm Beach Post has reported.

And last fall, the city of Fort Lauderdale passed an ordinance regulating vacation rentals that are not timeshares. Now, properties registered with the city must pass a maintenance and life safety inspection.

Short-term rentals are also under scrutiny in the Florida Keys. Last year, the Monroe County Tourism Development Council released a report singling out Airbnb for not collecting sales tax and the county’s 4 percent bed tax on behalf of property owners. The council’s report called for local governments to require the company to collect taxes. The county already requires rental licenses and permits for vacation rentals, as do the cities of Key West, Marathon and Islamorada.

Hotel industry on the defense

There are about 54,000 hotel rooms in Miami-Dade County with roughly 4,000 in the pipeline for the next two years. Last year, at least 11 hotels with 1,805 rooms opened. Industry experts say Miami’s hotel market could be reaching its peak in 2016 as revenues and occupancy rates begin to level out.

At a hotel panel covering the impact of short-term rentals on the hotel industry in April, hotel developer and CEO of Crescent Heights Russell Galbut said that the hotel industry is “under attack.” Hoteliers called for the implementation of local taxes, as well as regulation and enforcement of existing rules.

“Our stance is not about Airbnb. It’s about illegal short-term rentals,” Peggy Benua, chair of the Greater Miami and the Beaches Hotel Association and general manager at Dream South Beach, said. “We want to get everyone on a level playing field. … We really have to go through hoops to get an occupational license.”

On its website, Airbnb says it “strongly opposes large-scale speculators who turn dozens of apartments into illegal hotel rooms.”