Miami is still eighth-most expensive city to rent, and it’s getting worse

2012 photo of the Miami skyline

Miami renters beware: the city has held its title as eighth-most expensive rental market in the country this summer, and prices are still rising.

According to a newly released report from listing service Zumper, median rents in many of Miami’s already unaffordable neighborhoods are growing at a moderate pace.

For the city as a whole, the median monthly cost of a one-bedroom apartment hit $1,900 in June, rising 1.1 percent from the same month last year. Two-bedroom apartments were asking a median of $2,590 per month, up 3.6 percent year-over-year.

Common financial advice says you should be paying at maximum of 30 percent of your income on housing. To comfortably rent a one-bedroom pad in Miami, that means you’d have to be pulling in $76,000 a year.

Now take a look at Miami-Dade County’s median income, and a disconnect quickly appears: residents here make a median of $48,100, according to county figures, meaning their comfort limit on rent would hover much closer to about $1,200 per month.

By far, Fisher Island is still Miami’s most expensive neighborhood to rent. The exclusive island was asking a median price of $4,600 to rent one bedroom, followed only by Park West — sandwiched between downtown and the Omni area — with a median price of $2,600 per month. To get anywhere below $1,000, you’ll have to look in neighborhoods like Liberty City ($810), West Little River ($925) or Brownsville ($600), according to the report.

Earlier this year, Miami overtook Chicago as the country’s eighth-most expensive rental market — but Zumper’s figures show that might not last for long. The No. 9 city, Honolulu, boasts prices already close to Miami’s and is becoming more expensive at a faster pace.

Meanwhile in the No. 7 spot, rents in Los Angeles exploded during June. The median price for a one-bedroom jumped nearly 6 percent to $1,960 per month, while two-bedroom units spiked 10.4 percent to $2,980.

Renters in San Francisco, on the other hand, may soon find some relief. The city’s astronomical median rent of $3,510 for a one-bedroom held mostly steady during June, rising only 0.3 percent. Prices for a two-bedroom apartment actually fell 0.6 percent to $4,770 per month.

Check out a price map for all of Miami below: 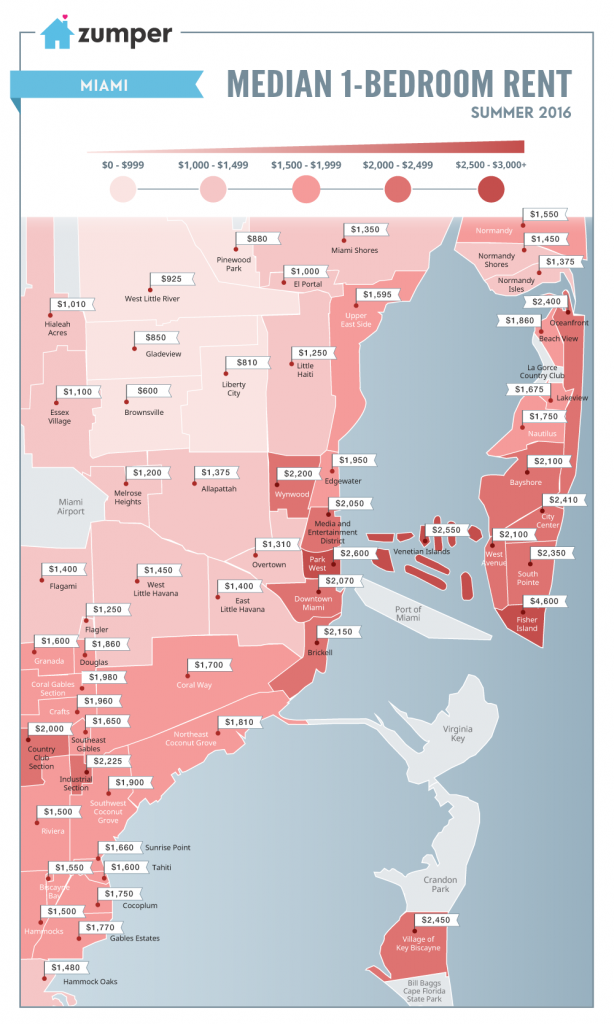